Home1 / My Health Videos2 / Motivation3 / Daniel Bove – Professional Athlete or not, Strength Training is for...

Daniel Bove –
Professional Athlete or not, Strength Training is for Everyone

Jake: Hey I’m Jake of Body by Jake and welcome to our motivational minute. Daniel Bove is with us – Phoenix Suns. I’ll tell you what man, I love basketball!

Daniel, first of all, great to see you! You kind of head up the performance here. All the guys in the gym and everything else that they do, you got to keep them physically fit, mentally fit, too.

I would imagine the myth of, it used to be that if you played basketball, you shouldn’t be in a gym training with weights. That still the same?

Daniel: No, no, not at all! We train with weights three to four times a week. Obviously as the season progresses and games, you know, start to become part of the routine you definitely have to pull back a little bit.

But weight training’s something we like to keep as a staple throughout the entire year.

Jake: Is there one go-to movement, one go-to exercise that you like to kind of impart on the fellas?

So we teach them to control single leg movements, lunges, squats. All these different movements.

We want them to do it with tempos, slow, split squats are one that we do with Mikael all the time.

Jake: So you want these guys more controlled?

Daniel: Controlled and not always. We’re not always moving. Sometimes, we like to pause in certain positions so that they can really own that position, because we know they’re explosive on the court. Sometimes doing too much of that, and not having control can actually lead to injury, so we actually try to go to the opposite, end control positions. And then they’re a little more healthy.

Jake: Got it! What’s a good tip for a guy or a gal who gets out, after work, before work, is you know, it’s not a seasoned athlete.

Daniel: I would definitely, the first thing I would recommend is finding someone who’s certified, someone who knows what they’re doing who can show you the ropes, so you’re not kind of just jumping in.

Find someone who knows what they’re doing. That’s the number one thing.Then be consistent.

Jake: We’ve got that! I’ve said that for a long time! Great to see you buddy! 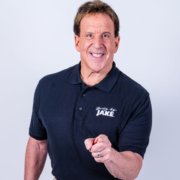 “Remember stick to the fight when you’re hardest hit, it’s when things seem worst that you must not quit. Don’t quit! Have a great day!”